For same-sex couples, the road to becoming parents is often more difficult than for their heterosexual peers. However, this picture is slowly changing for the better, with the number of homoparental families on the rise and an increase in LGBTQ adoption across the board. In the UK, same-sex couples have been entitled to adopt since 2002, although, until recently, many experienced discrimination and stigma during the adoption process. Around the world, the outlook for same-sex couples looking to adopt is varied and across Europe, America, and Australia many have welcomed LGBTQ adoption. However, there remain large areas of the globe where same-sex adoption is illegal, and homophobia remains a real and dangerous problem. We take a closer look at the global adoption map to discover where same-sex couples can adopt freely. 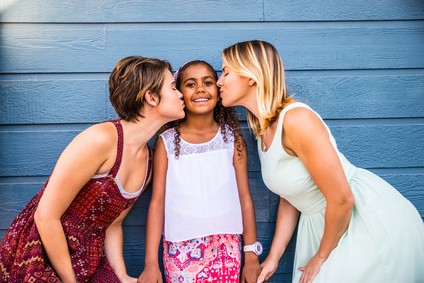 Same-sex couples across Europe are largely free to adopt with the most notable exception being Russia, who, frustratingly, take a dim view of homosexuality and have no laws protecting against discrimination of LGBTQ individuals. They do not allow same-sex adoption and have banned international adoption to countries who have legalised same-sex marriage.

The countries in Europe where same-sex couples are free to jointly adopt are:

In European countries where joint same-sex adoption is not legal, there may be circumstances where an LGBTQ individual may adopt solely, and/or their partner can later adopt their child.

South America and the Caribbean

The picture in South America and the Caribbean is varied when it comes to same-sex couples adopting. Some countries, like Mexico, have legalised same-sex adoption and welcome adoption internationally from same-sex parents. Whereas in other countries, homosexuality and same-sex couples in general, remains taboo, or as in Guyana and Jamaica, are criminalised.

Same-sex marriage and adoption are only legal in one country in Africa, South Africa. The rights of LGBTQ people across most of Africa are very limited compared to the rest of the world.

Same-sex adoption in Asia is almost none existent, with LGBTQ rights, in general, being incredibly limited. The notable exception to this is Israel, which is viewed as progressive in almost every aspect of LGBTQ life. In fact, Tel Aviv is often recognised as one of the most gay-friendly cities in the world. Since 2008 same-sex adoption has been legalised in Israel.

Can overseas same-sex couples adopt from places where same-sex adoption is allowed?

This depends on the adoption laws of both the country where the child is located and the country where the couple is based. Every scenario is different and it’s always important to obtain legal advice from an overseas adoption expert. Same-sex couples will not be able to adopt from abroad where same-sex adoption is not legalised in their home country.

The story of same-sex adoption is complex and despite progress being made in Europe, America, and Australia, there are still large parts of the world where same-sex adoption is illegal, and LGBTQ rights are limited. This is despite same-sex couples providing a home which is equally loving and supportive to that of ‘traditional’ heterosexual families. We hope that the positive changes we have seen will continue to spread around the globe. And, that one day, the question of same-sex adoption will no longer be a question, just a reality.