This common hormonal disorder impacts the lives of millions of women around the globe.

Polycystic ovary syndrome or PCOS is a common hormonal disorder causing an increase in ‘male’ hormones (androgens), irregular periods, and benign fluid-filled follicles in the ovaries. This frustrating condition can cause a whole host of unwanted symptoms including excessive hair growth, oily skin, irregular periods, weight gain and difficulty trying to conceive. What’s worse, because it can throw up such a range of symptoms, it is often difficult to diagnose. Affecting one in ten women of child-bearing age, it’s a condition that we should all be aware of. We look closely at PCOS, its symptoms, and potential treatments, below. 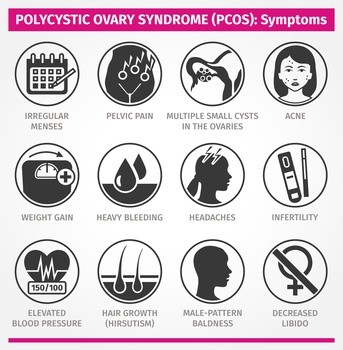 Polycystic ovary syndrome is a hormonal condition that affects the ovaries, causing a range of distressing and sometimes embarrassing symptoms. The three key features of PCOS are:

Sometimes called the ‘male hormones’, high levels of androgens (including testosterone) in the body can cause excessive hair growth, weight gain, and oily skin.

The ovaries become swollen and enlarged, with fluid-filled follicles surrounding the eggs. This can cause eggs to stop being released and can make it harder for women with PCOS to get pregnant.

What are the symptoms of PCOS?

The symptoms of polycystic ovary syndrome are diverse, and the condition affects each woman in a different way. These are some of the most common symptoms that women with PCOS face:

Women may find it difficult to lose weight and crave fatty and high-calorie foods.

Excessive hair on the face, back, and buttocks is a common symptom of PCOS while women may also experience hair loss and thinning hair on the head.

Irregular or no periods

Irregular periods and growths inside the ovaries make it much more difficult for women with PCOS to successfully release an egg for fertilisation.

Skin may be consistently oily and prone to spots well past puberty.

Discoloured patches of skin may appear, particularly around the armpits, groin, and neck.

PCOS has strong links to sleep apnoea, a sleep disorder that causes breathing to stop for brief periods during sleep.

Skin tags may appear around the armpits and neck.

Symptoms of PCOS usually start around the same time as puberty and, for some women, lessen or disappear as they enter the menopause.

How is PCOS diagnosed?

NHS guidelines state that for polycystic ovary syndrome to be diagnosed, two of the three key features of the condition must be seen in a patient. These are irregular periods, increased androgens and polycystic ovaries. Tests including a blood test and an ultrasound can help to identify these features. However, as the wide-ranging symptoms of PCOS can vary from woman to woman and many of the symptoms can be linked to other conditions and lifestyle factors, it can take a long time for women to get a definitive diagnosis.

It is unknown what causes polycystic ovary syndrome, however, there may be a genetic component as the condition is often found to run in families. High levels of insulin are also thought to be a contributing factor, and it is suspected that PCOS could occur more frequently in women who are less sensitive to insulin. High insulin levels, in turn, cause other hormones to be produced in greater amounts, including androgens which may cause many of the symptoms of PCOS.

How many women suffer from PCOS?

Although it’s difficult to assess how many women in the UK suffer from polycystic ovary syndrome (many are likely to be undiagnosed) at least one in ten women are thought to be affected with the potential for this to be as many as one in five. 3.5 million UK women are estimated to live with PCOS.

What treatments are available for PCOS?

Polycystic ovary syndrome can’t be cured but there are a range of treatments and lifestyle changes that can reduce intrusive symptoms and lessen the impact of the condition. Treatments normally focus on reducing a specific aspect of the disorder. These are some of the most common treatments for PCOS:

The symptoms of polycystic ovary syndrome are often improved through diet and weight loss. Following a healthy balanced diet and taking regular exercise is a change that can not only tackle some of your symptoms but also improve your overall health. Losing weight can reduce insulin production in the body which can, in turn, reduce some of the abnormal hormone levels associated with PCOS. Your doctor may be able to provide helpful information on diet and exercise if you are struggling to make a change.

There is a whole spectrum of medicines that tackle some of the symptoms of polycystic ovary syndrome. These include some contraceptive drugs to balance hormones and reduce acne, Metformin to reduce sensitivity to insulin and fertility medications to increase your chances of conceiving. The balance of medications you need will be individual to your unique set of symptoms.

In severe cases, and for women who are struggling with their fertility, a doctor may suggest a minor surgery called, laparoscopic ovarian drilling (LOD). This procedure removes some of the tissue in the ovaries that can stimulate the production of androgens and helps the ovaries to produce healthy eggs regularly.

Will PCOS affect my fertility?

Polycystic ovary syndrome is one of the most common reasons that women struggle to get pregnant. With the overproduction of androgens interfering with the normal function of the ovaries and reproductive system. Some medication can help to regulate ovulation, including Clomiphen and Metmorphin. Other medications called gonadotrophins are designed to stimulate follicle growth in the ovaries and may be given by way of injection. If medication is unsuccessful then laparoscopic ovarian drilling may be a further treatment option (see above). The good news is that PCOS is often very treatable when it comes to restoring fertility and many women with PCOS go on to have healthy babies.

Will my PCOS disappear when I hit the menopause?

The difficult answer is perhaps. Although some of the symptoms of polycystic ovary syndrome related to fertility and periods may lessen or disappear as you approach the menopause, the condition impacts a range of systems and you may be left with some intrusive symptoms. As you age PCOS also increases your probability of other health problems including diabetes, heart disease, and stroke. This is just one reason that it is so important to seek a diagnosis and start treatment as soon as possible.

I think I have PCOS. What should I do?

If you recognise some of the symptoms above and think you may be suffering from polycystic ovary syndrome it is important that you seek medical advice as soon as possible. Arrange a visit to your doctor who will discuss your symptoms with you and may then refer you for further testing. PCOS is a frustrating and difficult condition but with early treatment and the right lifestyle changes, it can be controlled. A diagnosis is the first step to managing your symptoms successfully.