How to Read a Sperm Test Result

You have decided to have a baby. It’s an exciting time and you can’t wait to start your family. But as the months tick by, you start to worry. Is something wrong? Shouldn’t this be easy? After all, what could be more natural? The first thing to do is to stop being so hard on yourself. You are not alone. The truth is that thousands of couples around the world experience fertility challenges every year. If six months have passed since you started trying to conceive, it’s worth scheduling an appointment with your doctor. They may recommend a series of fertility tests. One of the most common fertility tests is a sperm test.

We explore what sperm tests are and how you can interpret the results, below.

What is a sperm test?

Often called a semen analysis, a sperm test takes a closer look at the health and viability of the sperm your body produces. If you’re having problems conceiving or it’s just taking longer than you would like to get pregnant, a semen analysis can help determine if there are any biological reasons preventing pregnancy. 40% of fertility problems are linked to male issues, including sperm production, so if you are struggling to conceive then this test should be high on your list of next steps. A sperm test is quick, painless and can provide valuable insight into your personal fertility. 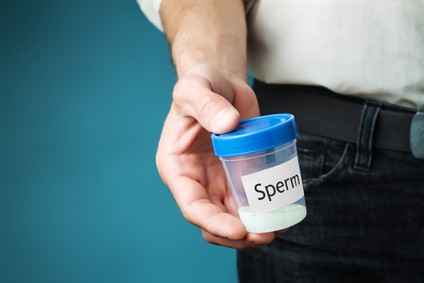 What can a sperm test tell me?

Semen is more than just sperm. In fact, just 5% of the fluid produced on ejaculation is sperm. The rest is made up of important fluids produced by the testes and the prostate. This fluid is important in fertility as it helps to stabilise and protect sperm. Normally, around 1.5 millilitres to 5 millilitres of fluid is produced. That’s about half a teaspoon to a teaspoon of fluid. If you’re coming in below the bottom level it could indicate a blockage or a hormonal imbalance. Low fluid production can also be linked to stress.

This result is one of the easiest to understand. It simply looks at the total number of sperm in a given sample. A normal result is considered anything above 39 million sperm. A sperm count below this level or a finding of no sperm at all can indicate a number of problems or a blockage. Low sperm count has been linked to lifestyle issues like diet and smoking as well as medical and hormonal issues.

Concentration looks at how many sperm are contained in a single millilitre of semen. The lower the concentration of sperm, the more difficult it will be for you to conceive. Sperm concentration differs vastly from person to person, but a normal range is considered between 15 million and 200 million sperm per millilitre of semen. If your sperm count falls under the 15 million mark this could indicate a blockage, abnormally high volume or reflect an unhealthy lifestyle.

The number of sperm that are moving (and that move well) can have a huge impact on fertility. Sperm have to be able to move through the female reproductive tract in order to meet the egg for conception to occur. Motility measures the percentage of sperm that are moving. Motility levels should be over 40% in a healthy individual and at least 32% of sperm should be showing significant movement – such as forward movement or large circles. Low motility is called Asthenozoospermia and can be caused by smoking, medication or lifestyle issues. Poor motility can also be linked to a hormonal imbalance or blockage.

The shape of sperm is important, as only properly shaped sperm cells can enter the egg. To assess morphology, the doctor or technician will closely examine the size, shape, and proportions of sperm cells to check for abnormalities. Between 4% and 14% of the sampled sperm should have a normal shape. Normal sperm look a lot like tiny tadpoles with an oval-shaped head and long tail. The head should be around 5 micrometres long and 3 micrometres across. Abnormal morphology can indicate illness, problems with the testes or overexposure to high heat.

Sometimes called vitality, viability measures the number of live sperm in a sample. This is an important measure for men who are experiencing low motility as it helps to distinguish between sperm with low movement and sperm that are dead. At least 58% of the sperm measured should be viable. Some lubricants can have a negative impact on viability, so you should always check that you are using a fertility-safe brand. Other factors impacting viability include lifestyle choices and overall health.

After ejaculation, semen is thick and sticky. This is what helps it adhere to the cervix. Later it becomes more liquid to allow the sperm to swim freely and reach the egg. This process normally takes around 20 to 30 minutes. Delayed liquefaction or semen that never becomes liquid can be problematic and become a factor in preventing pregnancy. Poor liquefaction can indicate a problem with the prostate or other glands that support the production of semen.

The pH level of semen must not be too acidic. Over acidity can kill sperm or prevent fertilisation from taking place. The fluids that make up semen work together to provide a balanced environment for sperm to thrive in. Semen pH should be greater than 7.2. There is no upper limit but (acidic) semen with a low pH is likely to cause fertility problems. Abnormal pH levels are often accompanied by other abnormal measurements and can point to a blockage or health issue.

How do I prepare for my sperm test?

Before your sperm test, your doctor will discuss how the sample will be collected and any special steps you need to take before the test. These will normally include avoiding alcohol and sex for several days before the testing takes place. Your doctor may also want to know more about any medication or herbal supplements you are taking. You will normally be asked to provide a sample in a private room at your doctor’s office or fertility clinic. It may be that you have to provide two to three samples over a specified time period in order to get the most accurate results.

My results show I have a problem with my sperm. What now?

Once your results are in, your doctor will be able to advise on next steps. This may include further tests for you or your partner or a recommended course of treatment. For many men, lifestyle changes can have a dramatic impact on sperm health. These changes can include reducing your alcohol intake, improving your diet and stopping smoking. Intense heat can also impact sperm so avoiding hot baths and hot tubs is often reccomended. Whatever the outcome of your sperm testing, it’s better to be armed with the facts so that you can make informed choices regarding your fertility.

One thought on “How to Read a Sperm Test Result”