Can You Get Pregnant During Your Period?

The short answer is that this is very unlikely. However, if you are a woman who ovulates early, then yes, it is possible.

Since sperm can survive for up to 7 days in a woman’s body, if you ovulate early, it will be just after your period. If you have sex during your menstruation, then there is a slim chance that you could become pregnant.

Ovulation should occur once a month when an egg is released by the ovaries. There are a number of eggs in each of your fallopian tubes, but normally only one is released once it has reached maturity and the lining of the womb is ready to receive it. Between 24 and 36 hours before the egg is released, there will be a surge of a hormone called LH (Luteinising Hormone). This hormone is measured in fertility tests because it is a good indicator of when ovulation will take place.

Once the egg is released, it will only survive for 24 hours. However, if you have had sex within 5 days of ovulating, you stand a chance of becoming pregnant due to the fact that sperm can live for up to 7 days. Simply put, sperm can lay waiting for the mature egg to arrive, ready to fertilise it when it does. 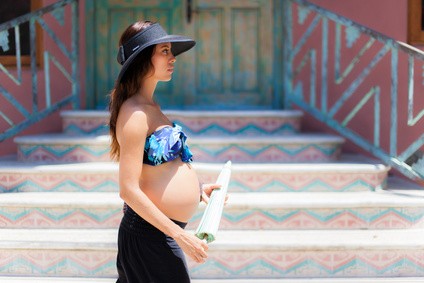 If you are trying for a baby, it is important to know when you ovulate. Every month, your fertile window lasts for about 6 days. Depending on the woman involved, the menstrual cycle can vary from 23 to 35 days.

The first day that you have your period is the first day of your menstrual cycle. Periods can last between 3 and 7 days, according to the woman concerned. After your period, your body begins to produce the hormone oestrogen, which helps new eggs to develop. You will normally ovulate in the middle of your cycle. Therefore, if you have a 28-day cycle you will ovulate somewhere around day 14. If you have a longer cycle (35-days, for example) then you will ovulate around day 17.

If you have a short cycle, you will ovulate around day 5. This explains why some women think that they became pregnant during their period. If you had sex near to the end of your period, the sperm would still be alive inside your body when you ovulated on day 5 and, consequently, could fertilise the egg that was produced.

Nowadays, you can buy fertility kits from the chemist, or you can use an online calendar. Another simple way is to count the days between your periods. Count day one as the first day of your period until the day before your next period starts. For example, if you have your first period on the 2nd of the month and your second period 29 days later, you have a 28-day cycle and you will probably ovulate between the 13th and 15th day. So, if you want to get pregnant, then this is the right time to have sex. Track your cycle for a couple of months in order to make sure you are having regular periods.

Additionally, there are signs that you’re ovulating, which you might pick up. Some women say they get a pain in the lower abdomen, either on the left or the right side. Another sign is that your vaginal mucus becomes clear and stretchy, which is to enable the sperm to travel easily into your cervix.

If you want to have a baby, finding out when your most fertile window is is the first thing you should do. Then, it’s best to make any lifestyle changes that could help you to conceive and to have a healthy pregnancy, such as quitting smoking and getting down to your ideal weight.

3 thoughts on “Can You Get Pregnant During Your Period?”