Can Gay People Have Kids?

For obvious reasons, a gay or lesbian couple are unable to conceive a child naturally. However, this doesn't mean that gay people can't have kids. These days, men or women in a same-sex relationship have the same right to parenthood as a heterosexual couple thanks to fertility treatments, as well as a variety of other solutions.
Today in the UK, LGBT people can become parents in a number of ways including adoption, surrogacy, sperm and egg donation or co-parenting. Read on to find out how lesbian, gay, bisexual and transsexual couples and individuals can start their family.

Over the past two decades, changes in the law have made parenthood accessible to LGBT people, making the UK one of the most progressive nations in Europe in this area. Here are some key dates for LGBT parenting rights as outlined on the website Stonewall.org.uk: 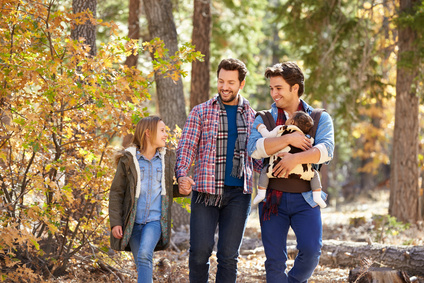 • 2002: The UK government gives same-sex couples equal rights when it comes to adopting children.
• 2004: With the Civil Partnership Act 2004, civil partners (including same-sex couples), are granted the same rights as married and opposite-sex couples in England, Wales, Scotland, and Northern Ireland. The first ceremonies take place in 2005.
• 2005: With the Adoption and Children Act 2002, unmarried couples, (same-sex and opposite-sex), are entitled to apply for joint adoption.
• 2007: In Scotland, same-sex couples can now adopt and foster children.
• 2008: The Human Fertilisation and Embryology Act 2008 (HFEA) considers LGBT couples the legal parents of children conceived via sperm, egg and embryo donation.
• 2013: Same-sex marriage is legalised in England and Wales on February 5, 2013 (The Marriage Same-Sex Couples Act 2013).
• 2014: Marriage of same sex couples officially comes into force on March 13, 2014. Same-sex marriage is legalised in Scotland in 2014.

How can gay people have children?

Today, there are many ways to become a mum or a dad when you are gay, lesbian, bisexual or transsexual.

Plenty of LGBT people raise children from previous opposite-sex relationships, whether their own or those of their same-sex partner.

One of the options available for gay men who want to become a dad is having a child via surrogacy. In short, a woman (called the surrogate mother) carries and gives birth to a child for another person or couple. It’s a solution for those who cannot carry a child but wish nonetheless to be biologically related to them.
In order to become pregnant, the surrogate mother undergoes in vitro fertilisation (IVF). Donor eggs are fertilised with the sperm of the future dad in a laboratory before being transplanted into the woman’s womb. Consequently, the surrogate isn’t genetically related to the child, even though she is the one carrying the pregnancy to term.
However, to legally become parents of the baby, a parental order must be issued after the birth. Additionally, only altruistic surrogacy is permitted in the UK.

Women struggling with infertility (LGBT or straight) can undergo donor egg IVF in order to become pregnant. Additionally, donated eggs can be used by a gay man or couple to have a baby via surrogacy.

Another option allowing LGBT individuals and couples to achieve parenthood is co-parenting. For example, a gay man and a lesbian woman can decide to have a baby together, even though they are not romantically involved. Similarly, a lesbian couple and a gay couple can also pair up to become parents together.
Conceiving with a co-parent is similar to having a baby via fertility techniques with a known donor. Accordingly, the woman who will carry the child can become pregnant via either artificial insemination at home, intrauterine insemination or in vitro fertilisation.

How to be genetically related to your child when you are gay or a lesbian?

Same-sex people can also be genetically related to their child. However, it’s important to know that in a gay or lesbian couple, only one of the partners will be genetically related to their child.
For instance, a lesbian woman who becomes pregnant using donor sperm and her own eggs is the biological mother of her child. However, this won’t be the case for her partner, unless they perform what is called “reciprocal IVF”. This technique means that one partner provides the eggs that will be fertilised with sperm. These are then transplanted into the other partner’s womb. In this situation, the person who carries and gives birth to the child won’t be the biological mother.
For gay men, one of the solutions to become a biological parent is surrogacy with donor eggs. Through IVF, the embryos created with the sperm of the future dad and donated eggs are transferred into the surrogate mother’s uterus.
Nevertheless, only one member of a gay couple can provide his sperm. Therefore, only one of the partners will be genetically related to their child. For this reason, certain couples choose to transfer two embryos into the surrogate’s womb: the first being fertilised with one partner’s sperm and the second with the other partner’s. This way (if both embryos survive), each twin is biologically related to a different dad.
Another option for LGBT people who wish to be the biological parent is to conceive with a co-parent, whether via natural insemination, intracervical insemination, intrauterine insemination or IVF. However, once again, if they are in a relationship with a same-sex partner, only one of them will be related to the child. In this case, one solution is to agree to switch roles for the next pregnancy.